In recent years the Thin Line style flags have risen to popularity, starting with the Thin Blue Line flag and eventually resulting in over 10 different colorways with multiple sects of public service workers being shown appreciation for their work. Colloquially, 'Thin Line' is meant to be a line of danger which public servants willingly cross for the greater good of society. With so many different colors available, one of the most frequent questions we're asked is: What do they stand for? So, We've put together this handy reference guide for navigating the symbolism behind Thin Line Flags. 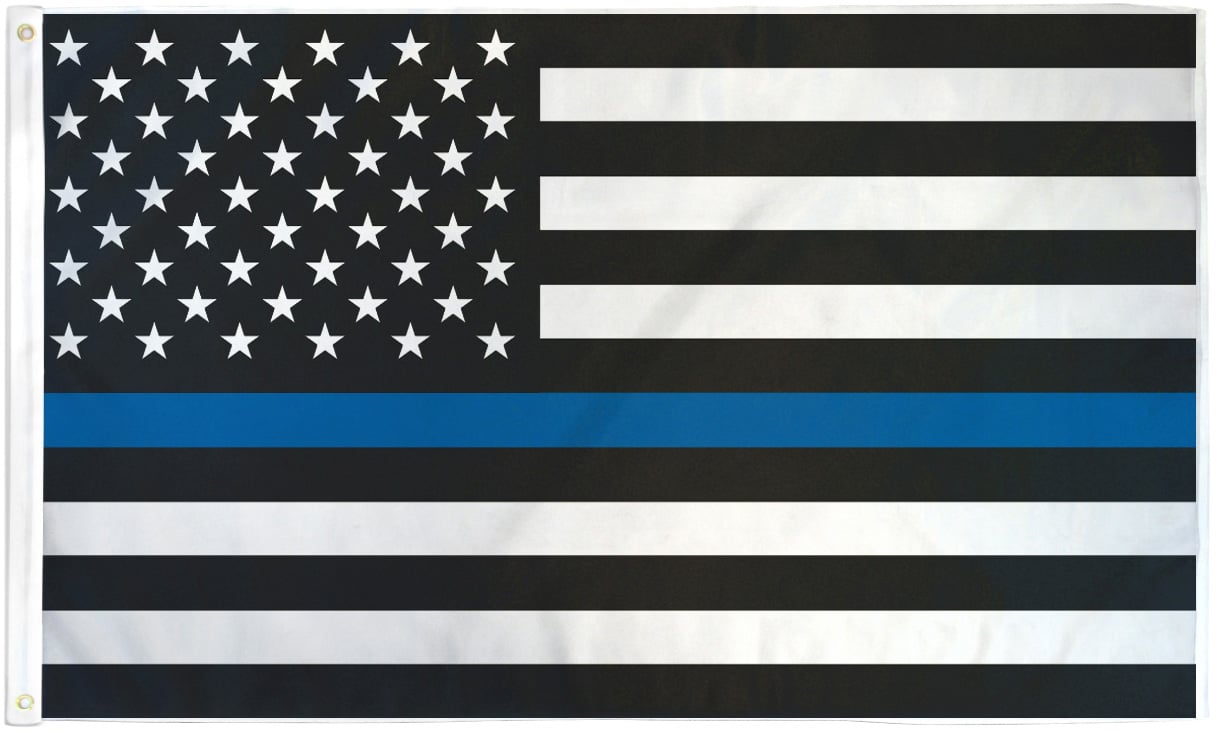 The Thin Blue Line is representative of Police & Law Enforcement Officers, the color blue refers to the colors of their uniforms. 'Thin Blue Line' is a phrase which refers, figuratively, to the line between chaos and order (or alternatively, between criminals and the potential victims of crime), with Law Enforcement officers being that barrier between. The phrase came to popularity in the 1950s by Los Angeles County Police Chief Bill Parker. Generally, proponents of the flag liken it to showing their support for the boys in blue, but with the USA aspect of the flag being monochromatic, many also use the flag to also memorialize fallen officers. 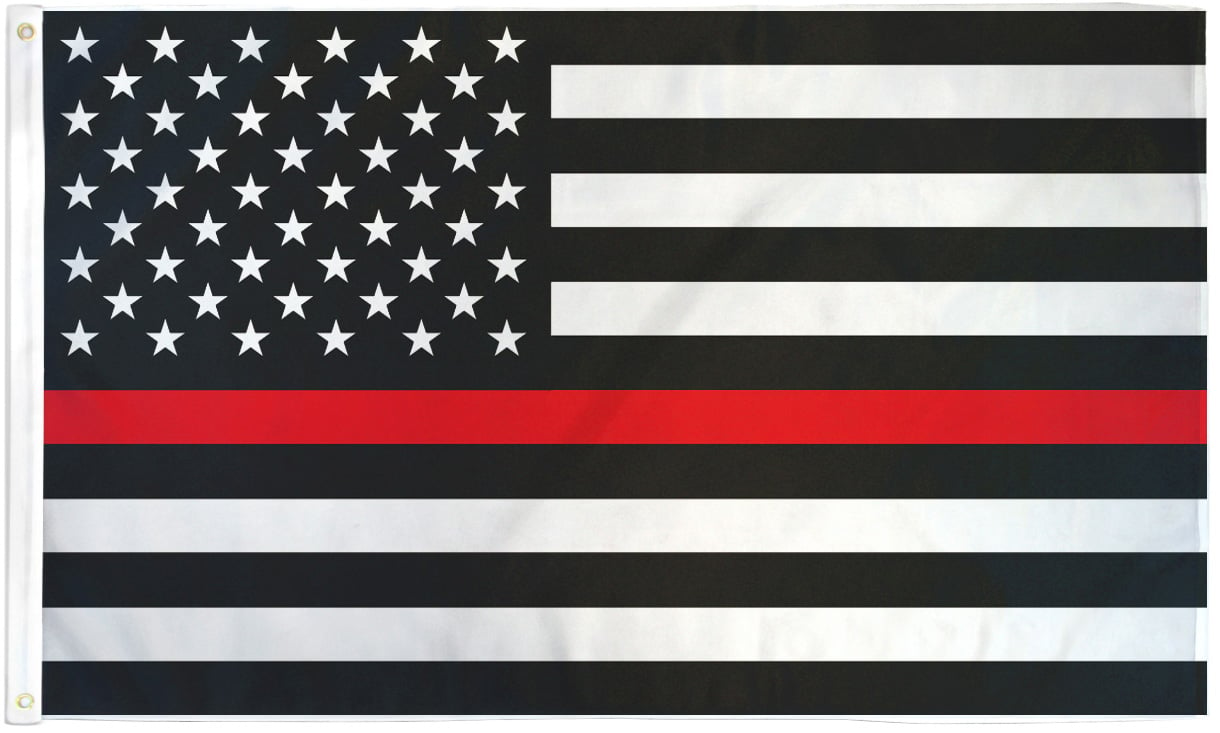 The Thin Red Line is representative of Firefighters, the color Red was chosen because of the color's association with fire. The phrase 'Thin Red Line' was originally referring to the Battle of Balaclava during the Crimean War, with the color red being a reference to both sides battle uniform. Today the phrase is representative of Firefighters and their courageousness in the face of danger, as the phrase has evolved into 'Thin Red Line of Courage'. As with the Thin Blue Line Flag, the Thin Red Line Flag can be used to show support of Fire Brigades or memorialize those lost in action. 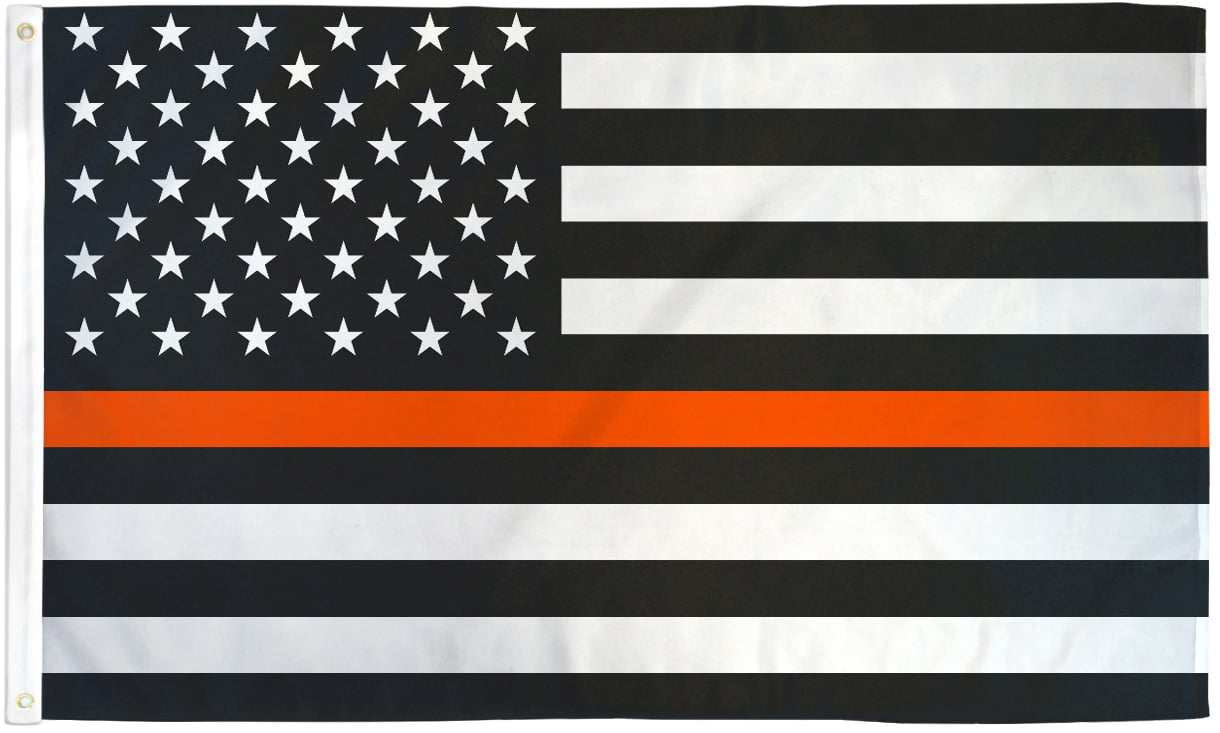 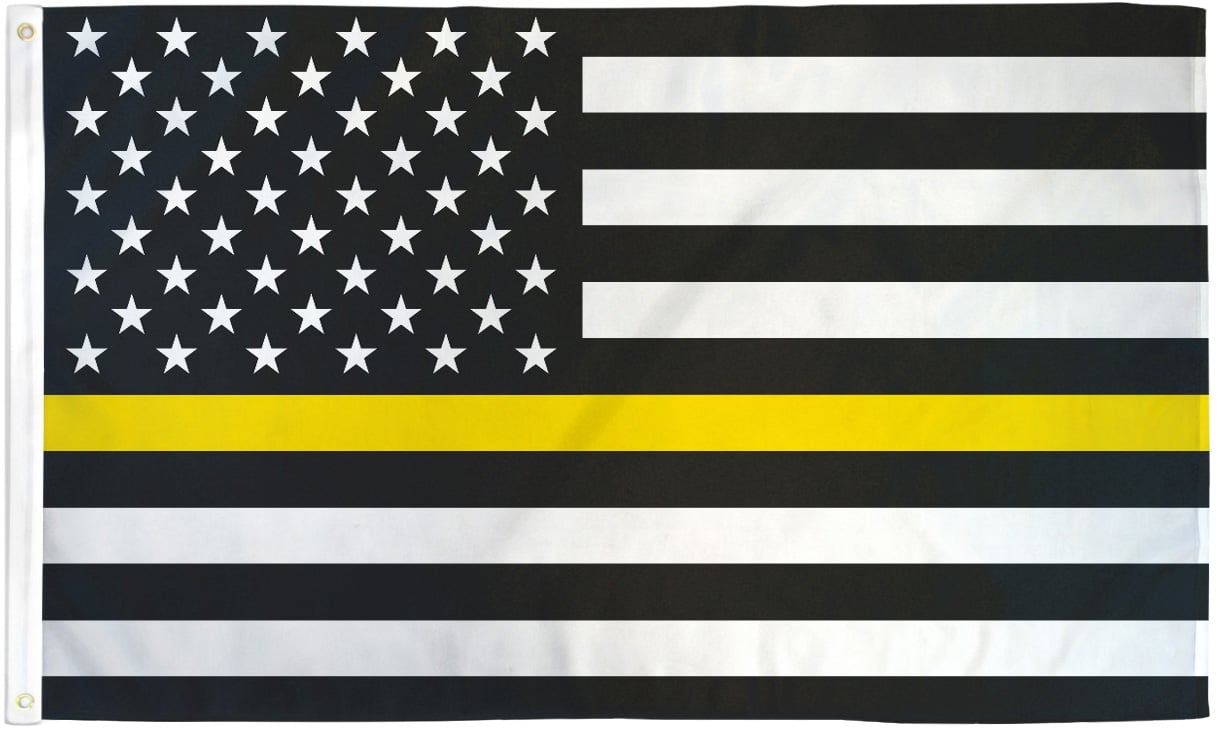 The Thin Yellow Line (commonly confused with the Thin Gold Line) is representative of Security Guards and Tow Truck Drivers. The color yellow was chosen as most security vehicles use the standard 'amber' colored lights. The color is also meant to match the reflective stripes on Tow Truck driver uniforms. Often times the Thin Yellow Line flag is flown in memorial of a Tow Driver who has lost their life on the job. 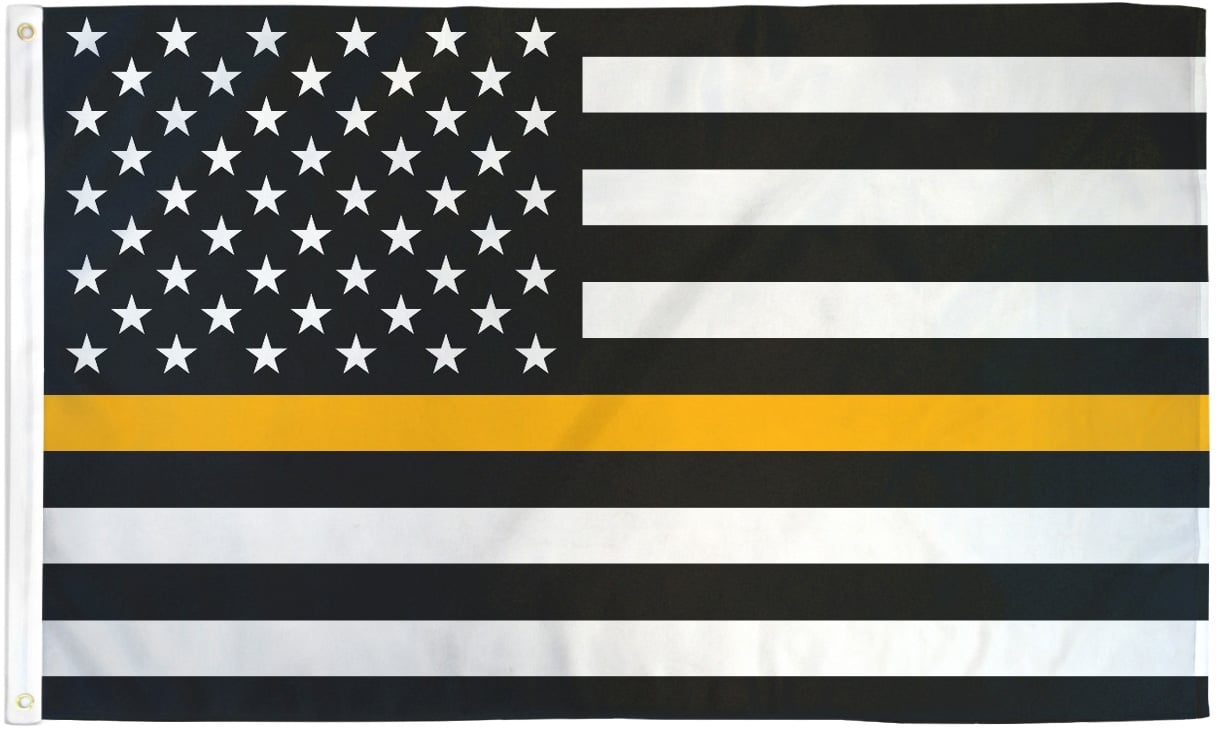 The Thin Gold Line is representative of Emergency Telecommunicators. Emergency Dispatchers are not typically thought of when referring to first responders, but their support to EMS works is described as 'truly gold'. The color gold is meant to symbolize loyalty and strength, which further solidifies the color choice for their flag. The introduction of the Thin Gold Line flag has helped EMS dispatchers and all they do become more visible within their industry. 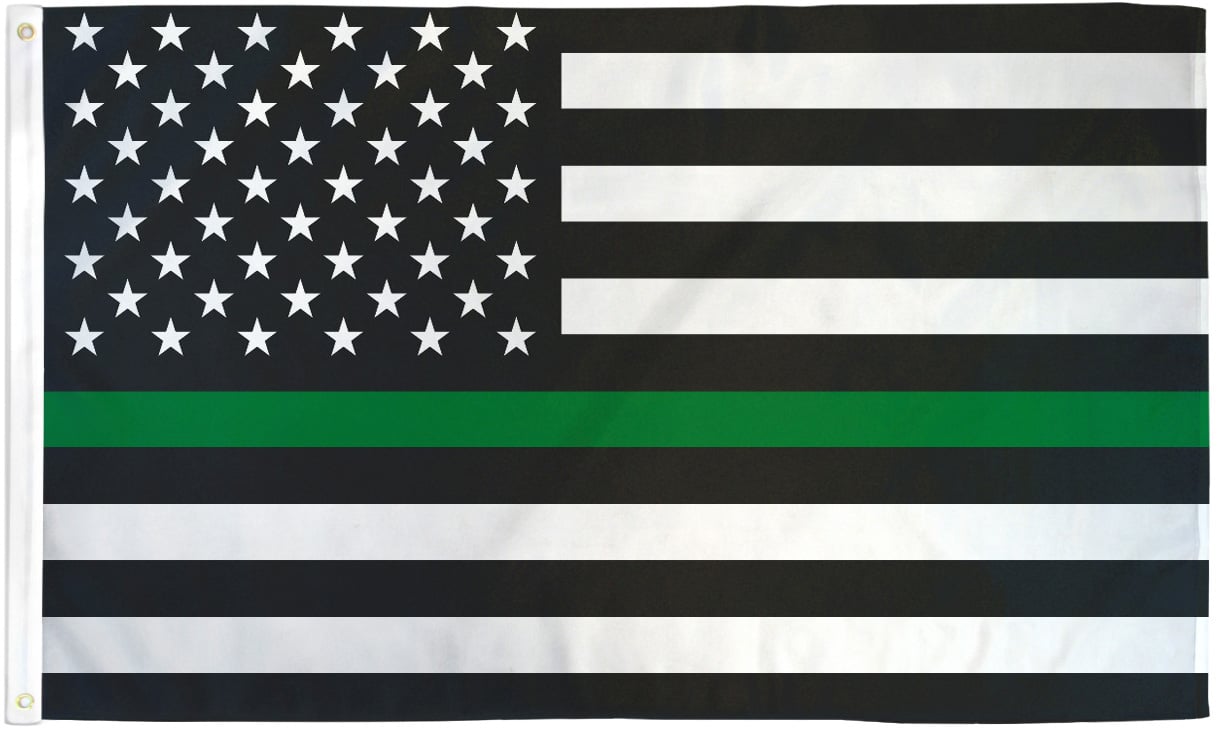 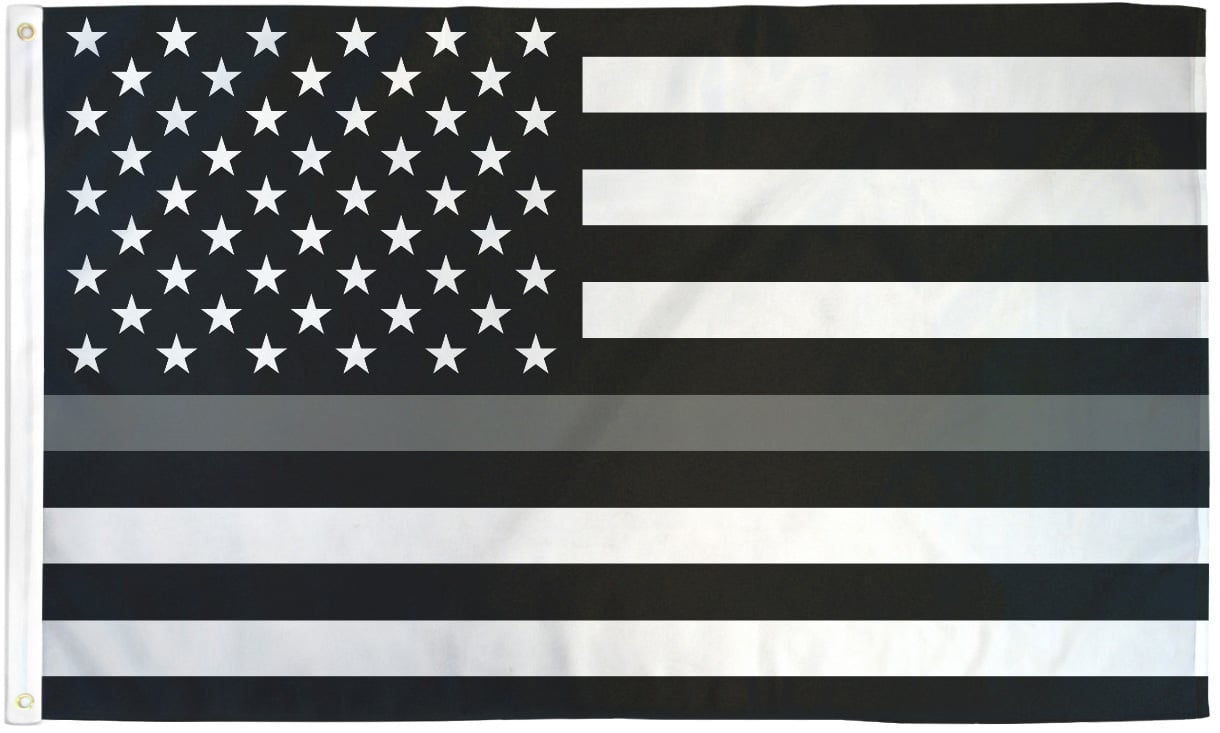 The Thin Gray Line (Silver Line) is representative of Corrections Officers. The color Gray was chosen to symbolize the color of handcuffs and/or jail house bars. The Thin Gray Line is meant to include all agents within the justice system such as: Jailers, Bailiffs and Parole Officers. This is one of the newer Thin Line styles that has quickly reached popularity within the group it represents. 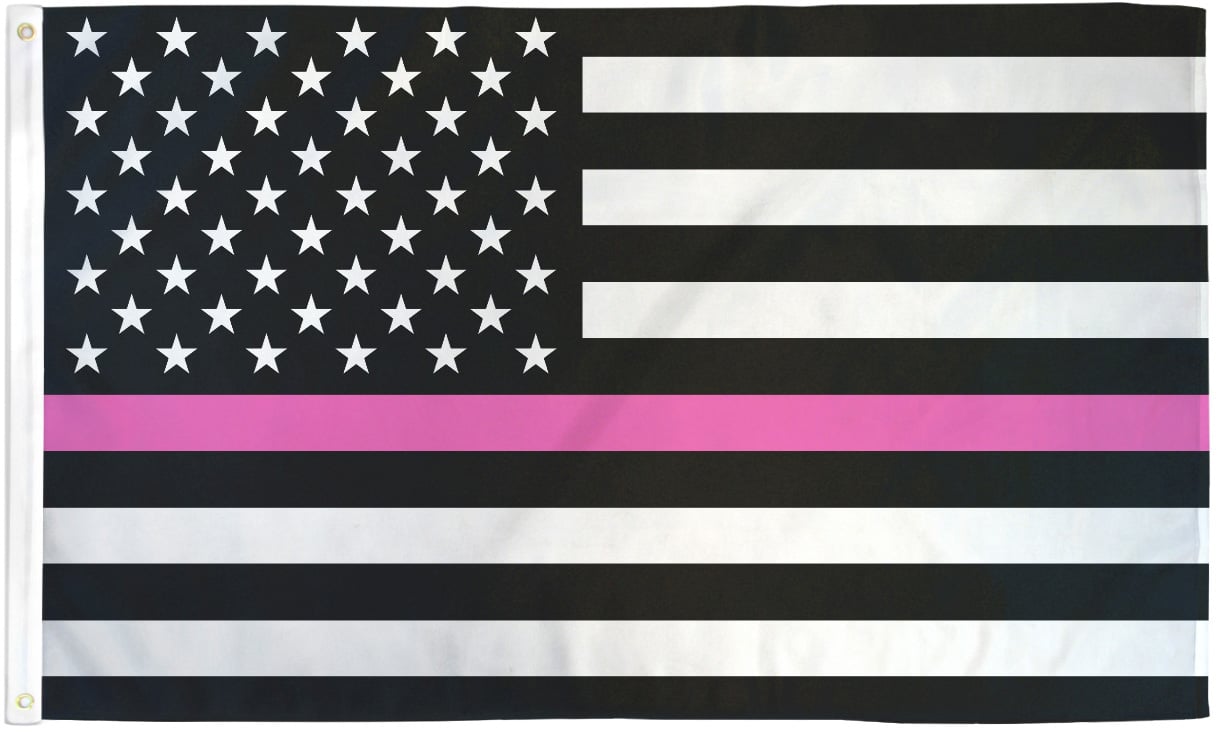 The Thin Pink Line is meant to represent a few different groups of people. Originally, the Thin Pink Line was meant to specifically stand for women in Emergency Services or any branch of the Armed services, it has since also taken on representing women who have or have had breast cancer.

Beyond the standard single line Thin Line Flags, we also offer two other styles that are meant to show your support of more than one area of public service. They are the Thin Red/Blue Line and the Thin Blue/Green/Red Line flags. The Thin Red/Blue Line makes use of the strip under the canton by splitting in the middle into both a Red and Blue line; The melding of these two colors are meant to show your support for both Law Enforcement Officers and Firefighters. The Thin Blue, Green, Red Line flag uses the formerly white stripes below the canton to add three solid lines of color. The tri-color stripes are meant to show joint support for our Law Enforcement Officers, Firefighters and Military (or Federal Agents). 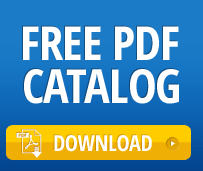